Ever since Apple reinvented itself in the public consciousness with the introduction of the iPod about a decade ago, we’ll get the rumblings every few months of the next i____ killer from so and so.  iPods and iPhones have been challenged again and again by products that, at times, were much superior to Apple’s offering but still unable to take the number one spot away from Steve Jobs and his crafty marketing team who are better at creating the popular need for their ever evolving, expensive devices than actual technological breakthroughs (iPhone 4 antenna trouble and no flash on iPads anyone?).  Now here come Amazon with their attempt to knock Apple’s dick in the dirt with their Kindle Fire.  But can they do it? 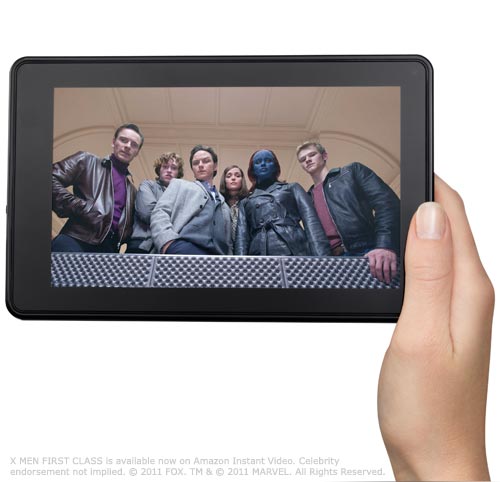 The next evolution of the tablet wars.

First off, the Kindle Fire is a bit smaller at a 7′ screen instead of iPad’s almost 10.  Some might be put off by this.  Others, though, may like the tradeoff for the heightened portability of the device.  Still, others may just not give a damn considering that its $199 price point is well below the standard $499 iPad.  A smaller price tag may also help people forget that the Kindle Fire lacks a camera.   To save weight and cost, it will also come with a 8GB hard drive.  But not to worry.  Amazon’s already got the memory storage problem figured out by giving purchasers free cloud storage for their Amazon digital purchases.

The digital catalog is where the competition really heats up.  iTunes and the Apple App Store both pushed the iPod and iPad, respectively, into godlike tech territory.  Amazon is pushing into the tablet arena with a loyal fanbase for their ebooks and huge catalog for music, movies, and television shows.  Amazon with their built-in client base has what no other rival has ever had before when they decided to go head-to-head with and i-brand.   And like Apple, they’ll have their own dedicated app store separate from the Android Marketplace.  Hell, the Kindle Fire will be running its own version of Android with updates handled by Amazon itself.  The device will also run its own browser, Amazon Silk, that will utilize the cloud function to speed up page load times.  It’ll be just as specialized as an Apple device.   Maybe that whole smug feeling of owning an Amazon Kindle will equal that of the Mac-zombies (highly doubtful, though).

So, is the Kindle Fire an iPad killer.  I don’t know, though I am dyeing to play with one to find out.  I think the tech junkies might pass on it for more gadgety fair with cameras and such.  That said, I won’t count this baby out.  It’s a low price point with the functionality that most people want.  Being able to read books,comics, or magazines or stream a movie or last night’s episode of The Office is what most folks are going to want out of it.  Let it sell enough and Apple may start dropping their prices.  Or, more likely, introduced some newer version only slightly better than the last at the same price point.

So, is the Kindle Fire a real competitor? Or is it just a glorified ereader?

« The 9/11 Conspiracy: A Dramatization by Maxwell Yezpitelok » From: “Batman” Subject: I will end you (1 attachment)